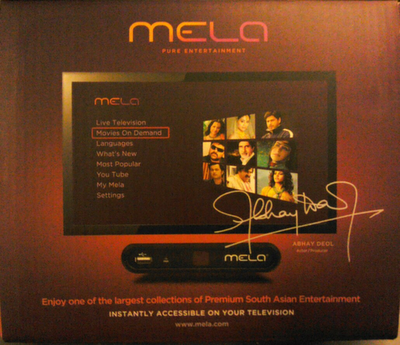 The box that was launched with so much promise in 2011.


Tonight, I am lighting a memorial candle for Mela.


I don't know how many of you adopted the Indian movies and live TV "on demand" service when it launched last October, but I for one felt a deep sorrow when the service quietly shut down last Saturday 15 September.

Several weeks ago, Mela had been forced to shut down the recently–shrunken live–streamed TV part of their business (on 30 July) after Dish Network locked up exclusive rights to as much Indian television as possible in order to put the competition out of business. At that time, we received an e–mail message announcing the end of Mela TV (and with it, the loss of programming mostly in Telugu but also some content in Tamil and Marathi).

Then came Saturday 15 September. I was staying overnight with a friend in New York City, and decided to find a movie worth streaming on my Android, using the app that Mela had created for a small selection of their library. Tap. Up came the Mela splash screen… and then a dialogue box announcing that the service had closed and thanking me for supporting Mela Movies. (I went to Google Mail to see if they had sent a message officially announcing Mela's shutdown. Nothing.)

I streamed only five minutes of news on RT and then went to bed.

It was very hard to sleep, because of two words: "How come?"

When Mela was officially launched in late August of 2011 (the box above would ship a while later), it was celebrated as a 100% legal way to see masala movies and live TV from some of India's regional networks (Maa, Jaya TV, Raj Television, Sun Network, and other smaller providers). Eros International, Yash Raj Films, and Shemaroo Entertainment, three of Bollywood's big players, signed on to provide a huge part of Mela's movie library. And Abhay Deol, fresh from appearing in the hit Zindgai Na Milegi Dobara, became the service's first (and, as it turned out, only) celebrity endorser.

All of that should have guaranteed good times for a long while.

I was one of the early adopters of Mela, and so I got the set–top box at the top of this post. To be sure, it had its limits (one app for YouTube, but none for Vimeo), and initially I wasn't sure if our regional cable/media gorilla Cablevision would raise a fuss (they didn't). After two months, I was using Mela practically every day. It was fascinating to see how TV is done in India (and what habits each broadcaster has), and I became a fan of J Movie (Tamil–speaking Jaya TV's channel for older Tamil flicks), Raj Digital Plus (again for their Tamil movie shows), and Marathi–speaking Saam TV for Limbu Timbu (thankfully, you can watch past broadcasts of the street game show on YouTube).

I never did get to stream every movie that Mela had rights to (how could anyone?), but there were some special movies I'll remember, such as the three films they got from director Murali Nair (Ladli Laila, a/k/a Virgin Goat, especially comes to mind).

When Mela later abandoned its own set–top box and joined the line–up on Roku, it took some getting used to. The TV offerings had been cut down dramatically (lots of Telugu TV, but only two Tamil channels, including Sun TV). Mela had separate TV and movie apps in Roku's Channel Store. But it was nice to see the widescreen offerings take full advantage of my 16 x 9 widescreen HD television, and the sight of more titles in Bengali and other regional languages was a good sign.

Then came 30 July, when a new exclusive (in more ways than one) deal with Dish Network's streaming service, Dish World, took effect. Suddenly, Mela was out of the live TV business. (Not everything migrated to Dish World: They have yet to add the Raj networks to their offerings.)

Meanwhile, Mela still had the movies–on–demand side of the business, but it wasn't without its issues. Roku had removed Mela Movies from their Channel Store, which left the Intel Macs and powerful Windows and Linux boxes, not to mention the iPads and Androids blessed enough to do Wi–Fi. (Those with existing Mela subscriptions could still access Mela through their Roku boxes, but only if they didn't remove the channel.)

During this time, a few things happened that made me wonder if Mela had a future. The Walt Disney Company had practically bought out UTV, which was a stunner in itself. Then Eros International launched its own streaming service, Eros Now, and their logo was scrubbed from the Mela website (as was the one for Yash Raj Films). Shemaroo and Shree International did offer what they could in terms of big ticket titles (The Dirty Picture and Hate Story, respectively), and we did get some PVR Director's Cut titles (such as The Forest and Good Night | Good Morning).

But apparently, it wasn't enough.

Put simply, getting the big boys on board and committing titles to Mela was key, especially if they wanted to make good on combating video piracy in a positive way. And the truth is that, unless India's many "woods" could do an about face and open up to the idea of making a service like Mela the destination for everything filmi… well, so much for the cause.

Ergo, we filmi fans are stuck with the effin' discs. (For cost reasons, I downsized to un–subtitled but legit orginal VCDs this Spring.)

To be sure, Mela itself could have done much more than just gun after big ticket movies and the occasional art house or B–movie item. Their website could have taken serious cues from Fandor and MUBI and learn how to be both social network–interactive (Facebook, Google+, Pinterest, Twitter, Tumblr e.g.) and a source of information and commentary on Indian cinema and television. Look at Fandor's Keyframe and MUBI's Garage and you'll see how far Mela could have taken things, so they could rise above the usual filmi gossip and thus initiate a serious and ongoing conversation about how India, with its many states and languages, views visual entertainment.

It should have happened. It can still happen, depending on what Mela's successor turns out to be.

In planning for the Service to Come After Mela, I would also look as such non–Indian services as DramaFever and MNET, which target Korean pop culture fans (DramaFever also offers Chinese–speaking content). I would also make certain that Roku, Boxee, and all sorts of mobile devices are part of the plan, all at once, for maximum impact.

And another thought: Forget about YRF, Disney–UTV, Fox Star, Eros, and the rest of the big boys. Focus on smaller films, and work to help people understand why those films matter. Encourage new filmmakers, DIYers, students, and the like to share their work, even the shorts and the documentaries. Let them and their audiences engage in discussions and shares, social network–style (MUBI's Garage e.g.). Partner with Vimeo, which has apps for Roku and Google Android (among other things). Invite sponsors of like mind to play a role: MUBI has a deal with Lomography, which resulted in an elegant MUBI-styled version of the Lomokino.

Get the drift? Make us care about Indian cinema, including the kind we rarely see.


I should say at this point that I made the investment in a Roku XS this year, not only because Mela made the move to Roku, but also because I can finally access RT (I also enjoy RT Documentary), the English service of Al Jazeera (via Roku Newscaster and Livestation) and New Tang Dynasty Television (NTD). I'm also a paid user of Pandora, and Fandor, which is the best I could ask for since the gutting of Bravo many years ago. So there's no question that the Roku's gonna stay.

I only wish Mela could have done likewise. But what can you do? Time to let go, and wait to see what will hopefully be capable of taking its place.

To paraphrase Ram Gopal Varma: "Topic is over."