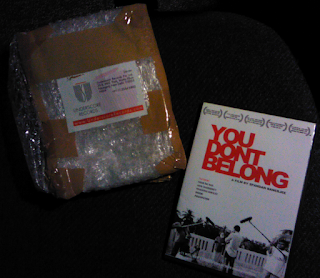 Yes, Spandan Banerjee's recent feature about how music tends to travel and change has reached my desk (via DHL, oddly enough).

I hope to get a review written and posted soon (most likely after dealing with a huge workload this week).

I also have Iron Sky on pre–order and hope to review the Region 2 PAL DVD this August on the first available chance.

On the Rosegarden front: The iMac used for post–production will need to step up to Lion (and then Mountain Lion) because the latest upgrades for iMovie and other Apple apps won't work with Snow Leopard (dang). Also, I'll need to renew my Vimeo+ account. Rest assured that the Just One Story… episodes will start flowing out more regularly afterwards.

It's going to be quite a Summer at the Rosegarden this year, no doubt.

[UPDATE 2012.09.02: I'm still waiting for my disc of Iron Sky; is it possible that orders from the States are being re–routed to EntertainmentOne?

A review of You Don't Belong should appear sometime early or mid–September.

Oh, and yes: the Vimeo+ account has been renewed. So that's out of the way.]

Email ThisBlogThis!Share to TwitterShare to FacebookShare to Pinterest
Labels: coming attractions, Lots of Topics are Pending

Once again, please excuse the silence — a lot has been happening lately.

And yes, because it's storytelling time again in New York's Central Park, the Rosegarden Mobile unit has seen some action. Two Saturdays in a row thus far, with another session set for 23 June.

Could we be back next month and in August? Too soon to tell, but two dates in September have already been locked down. You'll see the results eventually.

Oh, yes, and the Rosegarden logo just got a tiny makeover. Nothing drastic, mind you. Just a background change.

And now if you can excuse me… I've got a client video to get edited shortly…
Posted by Unknown at 12:18 No comments: