For those of you still smarting from Puja Jatinder Bedi's Ghost (see the previous post) or who had the sense to keep clear, your patience is about to be rewarded with this weekend's simultaneous theatrical / IPTV stream release of Sudhish Kamath's Good Night Good Morning, opening tomorrow.

I really like this trailer, which is part hommage to the old–style Hollywood previews of way back when:

Who's got popcorn this time?
Posted by Unknown at 20:52 No comments:

WARNING: Trailer embedded below is for adult audiences only (please see above).

Statutory Disclaimer (Before We Begin…):

I wish to state before diving into the following review that I screened this film — which was simultaneously released to theatres in India and VOD (video on demand) services — via Mela, a United States–based VOD service for South Asian (Indian) audiences. Mela was launched last year to deliver both movies–on–demand and Indian television broadcasters as different as Doordarshan, Sun Network, Maa, UTV, Raj Networks, and Jaya TV among others.

One of Mela's goals is to convince their target audiences — Indians living abroad, Bollywood fans, and the like — that they don't have to go to video pirates in order to get their first–run filmi fix. Indeed, Puja Jatinder Bedi's Ghost, which opened in Indian cinemas on Friday 13 January, was made available to Mela viewers on-demand the same weekend — the first of, I am sure, many to come in the months ahead.

I have also been informed that the cut of the film under review is the same that moviegoers in India saw, right down to the last frame.

Finally, I want to make it abundantly clear that Mela is above all else an open window on Indian media and entertainment, both good and bad. It is about something for everybody, no differently than what a legacy media company (Cablevision, Verizon, Comcast et.al.) does for its subscribers. And Mela deserves support and praise for delivering on its promise of "pure entertainment," as their slogan makes clear. Those who've had a taste of Bollywood and want more should seriously consider Mela; they will soon discover another world of pop culture they may not know exists.

And with that out of the way… 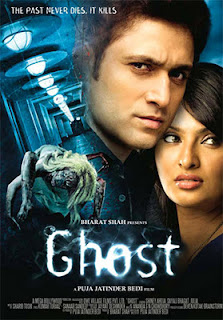 It is almost incredulous to believe that Bharat Shah, who once helped support Ram Gopal Varma's move to Bollywood (remember Satya?), would want to even invest one rupee into Puja Jatinder Bedi's Ghost, which can now declared the first true filmi bomb of the New Year.

And that is hard enough to swallow.

To be sure, it'd be easier for me to write this off as the sort of picture that has one breaking out the Criterion Collection's Region 1 DVD of Nobuhiko Obayashi's 1977 House (ハウス) or hit VODO online for the torrent of Carlo Ledesma's The Tunnel.

But then, both House and The Tunnel are films that actually respect their audiences.  Puja Jatinder Bedi's Ghost (which needs to be tagged with the director's name to avoid confusion with the Hollywood blockbuster of the same title) doesn't even bother caring. Indeed, it won't matter if the viewer is a practicing Christian (as are some of the characters), holds Southeast Asians or women in high esteem (one nurse of Southeast Asian birth meets her doom before the main titles kick in), or expects a coherently–told story. Bedi's Ghost, quite simply, will offend anyone who fits into any or all of the above.

And is that ultimately what Bharat Shah wanted? After all he did for Ram Gopal Varma? Was he serious?

First off, even minor Ram Gopal Varma can be amusing (Contract e.g.), but here we are in the hands of someone who can't even summon a little inner RGV. All Bedi seems capable of doing is to crib like mad from so many past creature features — the omnibus Creepshow, Tobe Hooper's Poltergeist, the Ringu or Ju–on franchises, the Steven Spielberg / George Lucas—made Indiana Jones and the Temple of Doom™, and so on. (The opening titles, themselves a complete mess without declaring the film's title, include a subtitle–style come–on for accepting Christ Jesus that unfortunately seems to have been indirectly inspired by — it hurts to utter the name — Monty Python and the Holy Grail. Except that the object of worship isn't a moose or a llama.)

And we have not even dealt with the plot — such as it is.

Basically, a string of gruesome murders in which the victim's heart is savagely removed, à la Spielberg and Lucas, is bad enough to put a call out for a supposedly hotshot detective (yeah, right), who himself, midway through the film's second half, can't help but make this a personal matter (despite what his superiors say as a warning)… because, sadly, he is a witness to one sadistic act — and the victim of another, albeit minor by comparison, which blanks out part of his memory à la, of all things, Ghajini (except that recently–disgraced actor Shiney Ahuja is clearly no Aamir Khan).

If this review seems messy, it's because Bedi's film is even more so. When this Ghost isn't ripping off Tobe Hooper, Steven Spielberg, or A.R. Murugadoss, it's offering up a head nurse (Sayali Bhagat) in clearly hospital–unsuitable attire and a cross swiped from pop idol Madonna's collection, a suspicious father figure who can't accept his son being a detective, some item songs that only drag the film's pace and running time (and one of them could have been spun off into a 60–second spot for Mercedes–Benz — that's how anonymously bland Mr. Ahuja is here), and an Aussie Christian woman who in flashback marries our hero… only to be subject to "like Jesus" sadism that could have been swiped straight out the 20th century European sado–masochistic exploitation movie catalogue.

This is a Bollywood horror movie? Shall we revisit the Ramsay Films catalogue?

(Reportedly, the Government of India's Central Board of Film Certification demanded some scenes be trimmed from the film. Although the digital print that Mela obtained isn't preceded by the expected rating card, I assume that it was given an "A," or adults–only, rating.)

Yes, I know, as a Creative Commons campaign made abundantly clear, that "creativity is built on the past." Certainly Puja Jatinder Bedi understands this very well, as anyone else would, like A.R. Murugadoss, Ram Gopal Varma, Nobuhiko Obayashi, Steven Spielberg, Shaik Nasir (Malegaon ka Superman) or for that matter Damon Packard. But if his Ghost is any indication, Bedi is not in league with any of them — certainly not even Damon Packard, whose ability to rework plundered material into something completely distinct and intriguing is beyond question (Reflections of Evil makes that perfectly clear, but so do Space Disco–One and Tales from the Valley of the Wind).

Of course, Bharat Shah is welcome to discover this for himself. May I suggest that he invite Mr. Packard to make his next film in India — and then fund the whole project from script to simultaneous theatrical / home video / VOD release?

He would certainly learn something.

[UPDATE 2012.06.11: I've meant to update this post following the release of Venus' DVD and several changes at Mela — including the gradual shrinking of their Indian TV offerings and the move away from their own set-top box to Roku, the iPad, and so on.  I was used to having channels as different as Maa Movies, Raj Digital Plus, and Jaya TV's J Movie on tap, and I'm not financially ready to add a rival VOD service just to get them back. On the other hand, I can understand why the changes at Mela — especially when it's clear they want to make movies their priority, as do Fandor and Mubi. Hopefully, like Fandor and Mubi, Mela will be able to set their sights higher without the extra baggage of streaming TV that can be done elsewhere.]
Posted by Unknown at 17:07 No comments:

We interrupt this broadcast...

… to bring you a General. Internet. Strike. 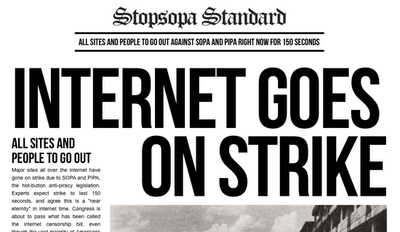 We wish this was just a joke.  But on Wednesday 18 January, it won’t be.

On that day, many of your fave Internet sites and portals — including (but not limited to) Reddit, Mozilla, Tucows, Free Press, all of the Cheezburger Network, and even Rosegarden Television — will be inaccessible due to a general strike in protest against the Stop Online Piracy Act (SOPA), on which the United States Congress has scheduled a vote for Tuesday 24 January.

We at Rosegarden are against this proposed legislation (and its companion bill in the U.S. Senate, the Protect IP Act, or PIPA), which would have devastating consequences not only for the Internet as a whole, but also for those who are its many users (like you) and those who rely on an open Net for creativity and communication.

It is bad enough that a Great Firewall of (Mainland) China exists. We do not want one on North American soil.

You can join in the strike by 1) accessing the official Strike Against SOPA site and asking your fave site or portal to black out on 18 January and 2) adding your own site to the list.

And please plan accordingly for the rest of the day. Maybe get out of doors, visit with loved ones face to face if you can… you get the idea.