Just One Story… Episode 10:
The Princess and the Pea

I haven't had a chance to update the Promenade Digital homepage to reflect this, but I do welcome you to the Second Season of Just One Story… my simple and humble streaming series devoted to oral storytelling done live (and done best that way).

Ladies and gentlemen, boys and girls, please welcome Jeslyn Wheeless, here to sing you a song and tell you a Hans Christian Andersen favorite:

This work is released under a Creative Commons Attribution–Noncommercial–No Derivative Works 3.0 Unported License.

The not–so–secret word next time is… cornbread.
Posted by Unknown at 23:43 No comments:

This is extracted from a TV Asahi broadcast on 11 March 2011 — clearly shot at street level (in Kesennuma, Miyagi Prefuncture), and notable for the absolute absence of needless commentary.

And I stand speechless.

Do watch it to the very end.

Merci to the Kanpai group in France, who snagged this at the moment that they did.
Posted by Unknown at 20:52 No comments:

Your Projectionist is starving for some big screen filmi goodness. Will Rohan (son of Sholay director Ramesh) Sippy's crime drama Dum Maaro Dum — the second genuine Bollywood movie picked up by Fox Searchlight — deliver when it drops on 22 April?

Here's hoping it does, what with its Goa setting and Abhishek Bachchan and Bipasha Basu in the leads:

Especially when you have to make your sell in less than ninety seconds.

Oh, yes: No mention of the film on the Fox Searchlight website, even though the release date is close.
Posted by Unknown at 13:34 No comments:

Post–production on the next Just One Story… episode(s) will be temporarily on hold due to the heartbreaking news of the 8.9–magnitude earthquake and tsunami that have devastated the east coast of Japan (including the port city of Sendai).

I have friends and acquaintances who either live in Japan or have family members there. Thus far, no one has been lost to the whims of Mother Earth.

It has been impossible to access Facebook today and not see a few posts related to the earthquake and tsunami; I've generated a few myself, asking if anyone's alright and still very much with us. (200 to 300 hundred people alone reportedly perished in Sendai.)

The BBC has set up a dedicated section of their news site for detailed reports and updates. Check it often, and in the meantime, pray/meditate/visualize for the safety of so many loved ones… maybe yours.
Posted by Unknown at 12:56 No comments:

One step closer to becoming [past] history

There are at least two new Just One Story… episodes I would love to get put together and bopped off to Vimeo. Then there is the grain of a brand new project that, once translated and subtitled in Esperanto, could give the gesamideanoj a glimpse of the United States that rarely gets seen. In other words, I've got movies to make.

The problem is, I end up having to dissect this:

For those not familiar with the story: outgoing National Public Radio fund–raising executive Ronald Schiller and a colleague named Betsy Liley arrived at Café Milano, a Georgetown, Maryland eatery, to meet who they believed to be two representatives for a Muslim organization willing to give the public broadcaster a large windfall (USD 5 million).

What happened instead… well, you can see for yourself above. Basically, Mr. Schiller and Ms. Liley — and by association, NPR — got "punk'd" (gamers would say "p8wned") by James O'Keefe and Project Veritas (ironically, the Latin word for "truth") — the same Conservative agitation team that brought you the downfall of ACORN.

It's done more, however, than just show Ronald Schiller the door (he was readying to take a new role over at the Aspen Institute, anyway). Now NPR's own CEO, Vivian Schiller (no relation, by the way), is gone, too.

One possible reaction to the above is to echo the words of NPR ombudsman Alicia Shepard:

"Doesn't anyone in NPR’s top management think of the consequences before they act?"

Exactly. Didn't anyone in Mr. Schiller's team bother to check the background of the people who sent the invite? Couldn't they even had bothered to poke around the faux organization's phony website to see if there wasn't anything fishy going on — especially when it was clear that Project Veritas is made up of Conservatives determined to take down as many big name "liberal–leaning" entities as possible through video stings like this?

Worse, still, this is happening at a time when public radio and television stations are trying to raise funds through their occasional beg–a–thons, something I am very resistant to.

Does this mean that I don't value public broadcasting? Well, my hangup isn't with the idea of non–commercial radio and TV — rather, it's over how NPR, PRI (Public Radio International), APM (American Public Media), and television's PBS have (d–)evolved.

Worse, I don't hear any big names in the Republican–led House of Representatives raising questions about Public Radio Capital. It too gets funds from the Corporation for Public Broadcasting — so it can grease the wheels of buying out (in back room deals) and taking over college and university radio stations that were better off being programmed by their students and members of their surrounding communities. That alone takes the "public" out of public broadcasting, as does making programming decisions (whether for TV or radio) without direct public participation, even if those who participate have no money to give (but whose voices should still count).

Sadly, the current tone of the arguments for the de–funding (and in some quarters, the abolition) of U.S. public broadcasting remain fixed on perceived "liberal bias." I don't have the bandwidth to hyperlink every essay that would disprove that (a good round of Googling will fish them up), but it's clear that, while, yes, public broadcasting is riddled with issues, you won't see them getting much air time. Especially when a Conservative operative who believes himself to be a filmmaker (Damon Packard he isn't) is the latest media darling.

As I said, "embarrassing" is hardly the word that describes my current sentiments.

Joel Meares has a more emotionally–metered assessment of the sad affair over on the Columbia Journalism Review website. Read and digest deeply.

[UPDATE 2011.03.11: More words of wisdom and reflection, from Bill Moyers and Michael Winship, over at Common Dreams. Like me, they question how someone like Ronald Schiller could just fall for James O'Keefe's bait. Read it in full, and ask yourself what you can do to deal with this mess.]
Posted by Unknown at 12:53 No comments:

Vimeo user @paulmadethis offers what can only be considered the movie of our time, made back on 21 February, 2011.

Stay strong, Wisconsin. "Forward!"
Posted by Unknown at 21:55 No comments:

House Lights:
One Estrella that deserves to fall 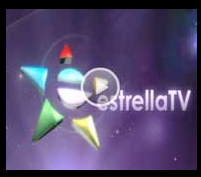 The last time your Projectionist commented on anything involving Spanish–speaking radio or television in the States, it was about Televisa's control of the Univisión networks.

But then, I wasn't planning to comment on EstrellaTV, part of the Liberman Broadcasting group (just look at their station maps to see how much of the States they cover). This network is accessible in the New York metro area via WPIX/11 (as a digital side–channel).

Have you ever tried watching EstrellaTV? And how often have you ended up switching to one of the Univisión or Telemundo channels, for example?

Moreover, did you find yourself reaching for the remote to escape the likes of José Luis: Sin Censura? [Explore the NSFW site at your own peril.]

It is perhaps the most brazen and vulgar item on the EstrellaTV schedule. Even worse than the slots given oven to butchered movies (themselves minus all opening and closing titles — no way to show movies).

And it is now the target of a complaint filed with no less than the Federal Communications Commission — jointly filed by the Gay & Lesbian Alliance Against Defamation (GLAAD) and the National Hispanic Media Coalition — according to The Advocate.

The hyperlinked article also has some choice (again NSFW) examples of the "show" (such as it is) subtitled in English. I won't embed it here out of respect for my readers — not to mention respect for those working to bring profound and positive change in Hispanic radio and television. What the Liberman gang is doing is nothing less than criminal, and a betrayal of the trust of the audiences they want to attract in the first place.

Hopefully the fact that this complaint is being filed by two distinctly different entities will prevent the inevitable fallout from being swept under any rug.

Of course, the once–proud WPIX (itself part of Tribune) could distance itself from this quicksand by quickly ditching Liberman's disgrace of a network and either 1) court another entity with better programming or 2) start work on its own Spanish–speaking channel that can be programmed by those already living in the New York metro area. Unfortunately, with Liberman having a huge sway and a cash flow to match (they're not just a TV company), neither option is likely.

Maybe it would take bringing down the whole Liberman empire — and jailing their execs (and Mr. J.L. himself) — to send a serious message to those seeking to profit from the Latino communities of the United States: Respect their sensibilities first and foremost.

Or kiss your stars goodbye. It's up to you.
Posted by Unknown at 14:43 No comments: