A week ago, I promised to put up here the question and answer period that followed the 20th October screening of Nina Paley's Sita Sings the Blues.

It has now been a full week, and I apologize for the delay, which you may blame on my aging Mac Mini and all the issues it has with doing a proper transcoding to a format YouTube will recognize.

In the interim, I will soon be posting an audio–only version of the talk, as soon as I can figure out how to do it within Blogger. I thank you all for your immense patience.

I may yet get the video up, if one of my penguins (read: Linux machines) is up to it. Please bear with me.
Posted by Unknown at 22:10 No comments:

Email ThisBlogThis!Share to TwitterShare to FacebookShare to Pinterest
Labels: Delays

And it came to pass.

The Projectionist came, and videotaped the Q & A session (some forty–five minutes worth).

Many students and members of the SUNY Stony Brook University community came. They included students who were either "forced" to watch Mme. Paley's masterful interwoven retelling of the Luv Kush story — or who declared that they came freely to see it.

One of the scheduled guests, Sanjeev Javeri, couldn't make the screening, but Aseem Chabra (who is one of the narrators in the soundtrack, and the one who urges us not to challenge these stories…) more than made up for the absence of his colleague.

And a splendid time was indeed had by all. 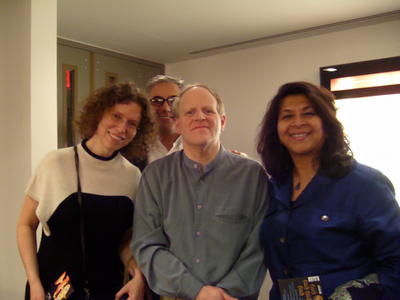 Blessings to all — especially Mme. Paley and Mme. Mukhi — who made it all happen. Special thanks to both ladies for allowing the Projectionist to record the talk on video.

It will take a while to get it up, let alone polished, but you won't have too long to wait.

Oh, and if you still haven't downloaded this one, what are YOU waiting for?

With so much attention being given to non–fiction movies about life in (and with) the (altered? mutated?) foodchain, your Projectionist has just learned of First Run Features' North American release of the French documentary Nos enfants nous accuseront ("our children will accuse us") by Jean–Paul Jaud.

It's currently playing a limited engagement in New York City's Quad Cinema, but you can now pre–order the NTSC DVD (in French with English subtitles) from FRF's website (USA only); it'll street on October 26th. Here in the States, it's been re–christened with the clumsy title Food Beware: The French Organic Revolution.

Until you get your hands on this report from the French village of Barjac (where the local school went organic in a big way, and with good reason), here's a bit of a rarity: the original French video trailer with the film ID'd by its superior original title:

Even with this generously long {ahem} taste, it's too soon to say how much the Projectionist can recommend this one. But when he sees more ordinary people in a non–fic feature than the "talking heads" of experts, it's a good sign.
Posted by Unknown at 20:25 No comments:

Not a movie, but a live performance this time.

Here's a "behind the scenes" look with none less than acclaimed storyteller and author Diane Wolkstein and celebrated Indian classical dancer Anita Ratnam preparing for their upcoming Work in Progress, a new take on the Monkey King Epic (a/k/a Journey to the West):

See you on the two nights before Hallowe'en.
Posted by Unknown at 18:18 No comments:

Just because the Northeastern United States are set to get soaked by a projected three more days of rain, we offer a little bit of Japanese–singing sunshine courtesy of Stephanie Yanez. Here's "Don't Say Lazy" from the anime K–On!

Does your house of worship sometimes put on a movie night — when they select a film appropriate for the congregation and arrange for everything from a big–enough screen to the snacks (not limited to popcorn)?

Your Projectionist's Unitarian Universalist congregation has its share of movie nights, but they usually come with a condition: They are usually arranged through and presented by one committee or another (such as Interweave, a LGBT concern, or the Racial Concerns Committee) and fit the concerns of that committee.

It would be one thing if your Projectionist could actually "fit" into one of those committees. But he doesn't. He views films as films and not as things to be neatly sorted here and there.

Meanwhile, his dreams for making simple, shoestring–budgeted feature video movies are languishing, because committee–presented movie nights are all he ever hears about at his congregation.

He wants better. And the congregation deserves better.

To that end, he is working on a parallel movie night roadshow, which would showcase movies his fellow congregants rarely (if ever) sees: movies from the underground scene (Damon Packard, Craig Baldwin e.g.), unusual documentaries, features from the open source movie movement (Sita Sings the Blues, Star Wreck: In the Pirkinning e.g.), and even something from the Nigerian video movie scene (which hems closes to what Damon Packard does and what the Projectionist wants to do).

There would be a post–credit discussion after the show, but it wouldn't be just about the topic of the movie, but also about how the movie was made — something that might convince congregants that they can join the Projectionist in making original movies instead of going to Blockbuster or the Redbox kiosk (or dashing off yet another Netflix rental order).

Any thoughts? The comments box awaits.
Posted by Unknown at 22:07 No comments:

The kind people of Tck Tck Tck and their allies have updated the Midnight Oil song "Beds Are Burning" for the urgent matter of climate change, with a major gathering of nation–states in Copenhagen this very December 7th.

Pass it on, everyone:

And here's where you can learn how to do your part.
Posted by Unknown at 21:12 No comments:

Rape is rape, and it is wrong.

But it is very sickening.

So much so that your Projectionist is launching a personal economic boycott of each of the above–named parties.

That means no more money for DVDs or other home video products that bear their names.

Your Projectionist is also officially boycotting the Criterion Collection's recent DVD release of Polanski's second feature Repulsion. All of Polanksi's other movies on home video, irrespective of the labels on which they are released, are also included in the boycott. That includes his new film The Ghost and all future projects as well.

Put simply, there is no excuse whatsoever for defending the indefensible. And that sentiment seems to be elsewhere online, as witness items from the Los Angeles Times, Women & Hollywood, the Women's Media Center, and Jezebel. Not to mention conservative portals such as Townhall, Pajamas Media, the Media Research Center (I expect nothing less from one L. Brent Bozell), and even the blatant anti–immigration VDARE.

Deep down, despite our political differences, we seem to agree on one thing, as I posted on Facebook tonight:

Rape is indefensible. Regardless of what else the rapist has done.

[UPDATE 2009.10.15: I amended the boycott to only target Polanski movies as well as whichever productions featuring the signees of the petition I come across. Not every Criterion release is evil.]
Posted by Unknown at 19:29 No comments: